The most powerful group facilitation process: The Six Thinking Hats 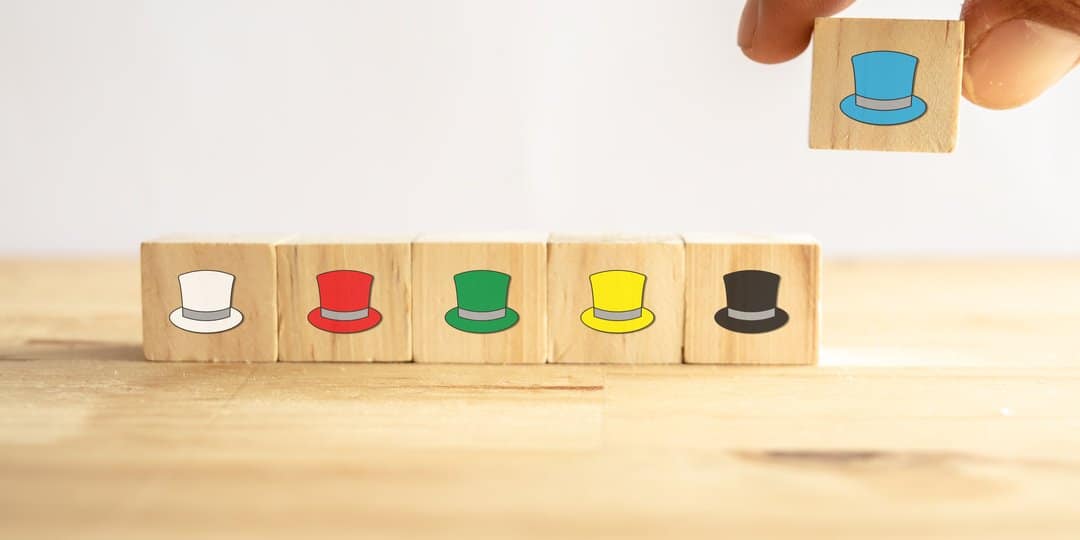 How do you get human beings to agree with each other?  It is a universal truth that every organization at some point has to get people to agree on something. It may be getting support on a new initiative, deciding on  a list of options for a change in policy, or finding common ground on a controversial topic.  Decisions must be made, and not everyone agrees.  That is human nature, that is reality.

Another universal truth is that humans tend to spend most of their time defending their original thinking.  If I come up with an idea, or I believe in an idea, it is against our nature to be flexible of thinking and let other perspectives into our paradigm.  If I believe something is not a good idea, all I can think about is the negative aspects of that idea.

So what can be done? What could a facilitator possibly do to get all viewpoints heard, equally, while at the same time making room for everyone to hear all other viewpoints and opinions, while at the same time, keeping the group think open to new, creative solutions?  That is a tall order. The best way I have found in 40 years of looking is a system called “The Six Thinking Hats”. First conceived of by the brilliant Dr. Edward DeBono ( who, among other things, coined the term “lateral thinking”), the Six Thinking  Hats is a way to facilitate all of the facts, emotions, opinions and strongly-held beliefs of a group, have every voice heard and come to the best decision possible.

What are the Six Thinking Hats?

The Six Thinking Hats process is done with a group that has a problem to discuss.  The facilitator asks the group to metaphorically put on a different color hat, and respond only with responses in line with the hat color. For example, the facilitator may ask everyone to metaphorically put on their White Hats, and the only responses that will be recorded are one’s associated with facts and figures.  Here is the list of the six hats and a short description of each:

The White Hat represents facts and information about the problem.  What the facilitator is looking for from the group is information, data and facts related to the issue at hand.

During Red Hat thinking, feelings and emotions about the problem are brought forth. This is a time to let out feelings, intuition, emotions, hunches or gut feelings.

The Yellow Hat is all about optimism.  The group can list out the benefits of the proposal being discussed. This is the time to discuss the positive aspects, benefits, value and positive potential of the issue.

The color green is associated with growth. Green Hat thinking is all about creativity, alternatives, growing and suggesting creative changes to the plan

The Blue Hat is like the conductor of the orchestra. The Blue Hat is worn by the facilitator throughout the process. It is also used to have the group or facilitator summarize the thinking of the group, make recommendations for possible next steps, keep the group focused and on task at hand, and the Six Thinking Hats process.

How does it work?

There are numerous ways to facilitate a dialogue and discussion using the Six Thinking hats. First of all, I like to have two people help with the discussion:

If possible, I like to have chart paper with the words White Hat, Red Hat etc. on each of five pieces of paper. Stylistically, it’s kind of fun to have the marker match the color of the hat.

The Six Thinking Hats approach allows participants to look through the lens of each hat, each perspective, one at a time. This is a much preferred method to looking through emotions, logic, information, hope and creativity all at the same time.  Using this method also forces the individuals in the group to switch thinking.